We’ve both been so busy with writing that we really haven’t done as much as we should have on the building front.

We moved into the mobile home at the end of February, one month after the fire. We settled in quickly and set up office spaces. James had the kitchen table and I used a desk in the living room that his brother gave us. Since then we’ve also set up a small table in our bedroom that James uses part of the time. Lately I’ve been using a lapboard and work in a recliner in the living room while we have two printers set up at the desk. The first printer we bought quickly and has a scanner and is wireless. We were never able to get it to work wireless, and the ink is expensive. I bought a used Canon printer that uses cheap cartridges that can be re-inked, and we use this for printing manuscripts. I still miss my old printer, but this Canon is pretty good.

After we moved in we were able to get the water well working and unhooked the hoses from my brother Bruce’s well. The next week our well went dry and we had to hook the hoses back up. Gas wells were going up all around us, including two within a quarter mile that were drilling that week. They use a lot of water. We called a well guy my cousin knew and found out that you can’t just drill a well deeper, you have to drill a new well. We arranged to have a new well dug, and then it started raining. It took weeks before it dried out enough for the trucks to come onto the property to drill. We had them drill this one twice as deep as the old well. Finally we had water again and the water wasn’t as hard as the old water, which meant I could finally use a dishwasher. The only problem was the water stunk horribly. The well guys added a new tank to our old one that fixed the problem. It took months, but we finally had good water.

The clean up also hit a snafu. I had my father’s tractor. It’s a medium-sized tractor with a front end loader. It wasn’t heavy enough to do the work easily. It took much longer than planned and when I finally had the dumpster loaded, I loaded it too much. I ended up having to empty part of it out of the dumpster. I became overheated and ill, and haven’t been able to take the heat since. So, only half of the mess is gone. I plan to leave the slab the garage was on, but the rest of the foundation has to go. We had pier and beam and need it all cleaned up before putting down a slab. We don’t want the new house to smell like smoke.

We have finally found a house plan that we like. I think things will start to move faster now. A builder is supposed to come look over the place in the next few days. It's been a long process.

With all the distractions I’m amazed we’ve written as much as we have. James has been amazing. I can’t believe how much he’s written in the last five months. He writes almost every day and usually all day. I get distracted too easily and find the whole day gone.
Posted by Livia J Washburn at 8:13 AM No comments:

Recipe in Murder By The Slice

The case of the missing salt

It has been pointed out by a couple readers that the recipe for the peanut butter cookies is missing how much salt to use. I remember cutting the salt in the original recipe to use less, but the changes didn't make it into the book. It mentions salt in the directions but not the ingredients. If you make the cookies 1/4 teaspoon works great.
Posted by Livia J Washburn at 6:10 PM 2 comments:

Murder By The Slice In Large Print 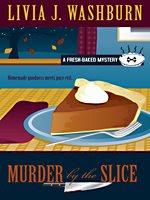 The second book in the Fresh-baked mystery series came out in large print earlier this year but I failed to post the cover then. I just received author copies and it's a nice hardback book.

Retired schoolteacher Phyllis Newsom's scrumptious baked creations are known throughout Weatherford, Texas, for many things, but being healthy isn't one of them. So this year's contest should be quite a challenge. . . . You catch more flies with honey, but it seems nobody ever told Shannon Dunston, despotic president of the Parent-Teacher Organization. Even though the carnival fare is heart-healthy, it won't help Shannon after someone stabs her in the chest.
I'll be posting more about this series and my new literary mystery series soon.
Posted by Livia J Washburn at 5:55 PM No comments: