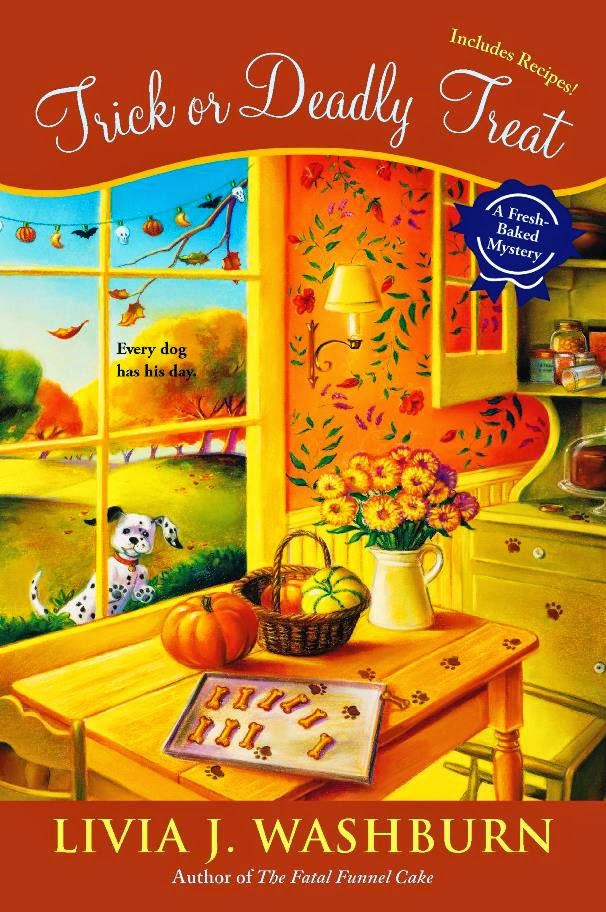 As far back as I can remember, I've loved dogs. Most pets, actually. (Don't get me started on snakes.) So as I've been writing the Fresh Baked Mysteries the past few years, it occurred to me that the characters didn't have any pets, and that seemed like something I should remedy. Sam Fletcher struck me as the most likely to want a dog, so the most recent book in the series opens with him and Phyllis visiting the local animal shelter to find one Sam can adopt.

They settle on Buck, a lovable Dalmatian who needs some medical attention from a nearby veterinarian. Since it's almost Halloween, Phyllis and Carolyn wind up making trick-or-treat snacks for both humans and dogs. Of course, the characters in these books can't go on for very long without murder cropping up, and this time it involves the vet who takes care of Buck. Before it's over, Phyllis and Sam are up to their necks in crime-solving, and once they're on the track of a killer, they may find themselves in danger as well...

This has been a hard year for our household, having lost two beloved old dogs who had been with us for what seemed like forever, 20-year-old Dobie and 14-year-old Max. Even though they were still around when this book was written, I'd like to add a special dedication to their memory. They're greatly missed and always will be.

It’s Halloween in Weatherford, Texas—which means Phyllis Newsom is baking up a storm of yummy seasonal treats...but she’s about to get even busier unmasking a killer.

While Phyllis and her friend Carolyn are preparing for a baking contest, her housemate Sam adopts Buck, an adorable Dalmatian who was hit by a car. To thank local veterinarian Hank Baxter for helping the dog, Phyllis and Carolyn bake a batch of doggie treats for his other four-legged patients.

But when they arrive at the clinic, the vet is in the process of being arrested—for the murder of his wife! Convinced that the police are barking up the wrong tree and that someone’s been burying evidence, Sam begs Phyllis to help find the real killer. Joined by Buck, the friends engage in a dogged pursuit of the murderer, who will stop at nothing to muzzle them…permanently.

Here's the opening of TRICK OR DEADLY TREAT:

Phyllis Newsom put her hands over her ears and said, “Oh, my goodness!”

“Yeah, they’re kinda loud, aren’t they?” Sam Fletcher said with a grin. “And enthusiastic, to boot.”

They stood in a cement-floored runway between rows of metal cages filled with dogs of all shapes, sizes, breeds, and mixtures of breeds. The air inside the cinder-block building contained an assortment of smells, all of them pungent and none particularly pleasant, but Sam didn’t seem to mind. In fact, he looked as happy as Phyllis had seen him in a while.

Maybe this wasn’t such a bad idea after all, she thought.

When he had first told her that he wanted to get a dog, her immediate impulse had been to say no. A flat, nonnegotiable no. And since the big, old two-story house on a tree-shaded street in Weatherford, Texas, belonged to her and Sam only rented a room there, it was Phyllis’s decision to make.

The problem was, Sam wasn’t just a boarder, subject to his landlady’s rules and decisions. The four retired teachers who lived in the house—Phyllis, Sam, Carolyn Wilbarger, and Eve Turner—had become more like family over the years. They were best friends as well, and in Sam’s case, Phyllis had to admit that the two of them were more than just friends. She couldn’t just dismiss what he wanted out of hand.

Because of that, she found herself in this big, smelly, noisy room full of barking dogs.

The young woman who worked as a volunteer at the animal shelter wore a plastic name tag that read JULIE on her shirt. She smiled, waved a hand at the cages, and said, “Feel free to look around all you want, folks. I’m sure you’ll find just the right dog for you.”

“Thanks, Julie,” Sam said. He went over to the closest cage, which held a German shepherd, and put his hand close to the bars so the dog could sniff it.

According to the paperwork in a clear plastic envelope attached to the cage, the dog’s name was Daisy and she was three years old, no health problems, good with children. That wasn’t really a consideration since no children lived in Phyllis’s house. Her grandson, Bobby, visited sometimes, though, so actually it was important that whatever dog Sam picked was well behaved and safe to be around children, she thought.

“Howdy, Daisy,” Sam said as he scratched the dog’s muzzle. “How ya doin’, girl?”

Phyllis smiled. The affection Sam felt for this dog, for all dogs, really, was obvious. He was a genuinely good man, and she was glad she had gotten to know him, even this late in their lives.

Daisy licked Sam’s fingers. Phyllis could tell that he didn’t want to move on to the next cage, but he had to take a look at the rest of the dogs. Phyllis stayed with him as he made his way slowly along the runway.

She saw beagles, schnauzers, Chihuahuas, and lots of mutts. Big dogs, small dogs, shorthairs, longhairs. Most were eager and friendly, as if they knew that the humans who came to see them held their fate in their hands.A few seemed sullen, and Phyllis wondered if they had been mistreated and no longer trusted anybody who went on two legs.

What was that famous line from Animal Farm? “Four legs good, two legs bad”? Something like that, she decided. Unfortunately, all too often that was true. Her own experiences over the past few years with the uglier side of life had taught her that.

Animals killed, certainly, but only humans were capable of murder.

Sam broke into her thoughts by looking at her, shaking his head, and saying, “Well, coming here turned out to be a bad mistake.”

“I want to take all of ’em home with me. I don’t reckon there’s room for that, though.”

“I have a pretty big backyard,” Phyllis said, “but not that big.”

Sam sighed and said, “All right. I reckon I’m gonna have to—”

He stopped as the metal door at the end of the runway, between the kennel area and the office, swung open and a male volunteer came through carrying a dog. The animal was wrapped in a blanket and whimpering in pain.

“Lonny, what happened?” Julie asked as she hurried toward the newcomer.

“Aw, somebody hit this poor fella out on the road. I saw it happen just now as I was coming in. Looks like maybe his front leg is busted.”

“Do you think he belongs to somebody around here?”

Lonny shook his head and said, “I dunno. He doesn’t have a collar and he’s pretty skinny, so I’ve got a hunch he’s a stray.”

Sam walked up to the volunteers with Phyllis trailing behind him. He said, “That’s a Dalmatian, isn’t it?”

“I always wanted a Dalmatian when I was a kid. Are you folks going to adopt him out?”

“Mister, he hasn’t been processed in. You can have him right now if you want him. You’re gonna have to give me your word that you’ll take care of him, though. He needs medical attention.”

Lonny and Julie looked at each other, and Julie said, “That would be Dr. Baxter, about a mile back up the road toward town.”

“Then that’s where I’m takin’ him right now,” Sam said. “You can follow me if you want, to make sure that’s what I do.”

“I don’t guess that’s necessary,” Lonny said. “You got a car outside?”

Sam shook his head.“I’ll hold him. My friend here can drive.”

Sam’s decision to take the injured dog seemed awfully impulsive to Phyllis. She said, “Sam, are you sure you want to do this?”

He answered by reaching out and gently taking the blanket-wrapped Dalmatian out of Lonny’s arms. Sam was tall and lanky, but he was also strong enough to hold the medium-sized dog.

“This fella’s not gonna bite me,” Sam said with a shake of his head. “I can tell we’re gonna get along just fine.”


LINKS
Can be purchased in trade paperback or eBook format for/from: