Google I really like Google when I’m looking up anything on the internet. Then the whole Google verses Author lawsuit came up and we discovered several of our books available on Google that paid us nothing. Even that didn’t bother me as much as the latest thing they did. We had an internet bookstore where I sold books from our old bookstores. Most of my sales were on eBay and half.com. In 2008 we lost all of our stock when our house and studio burned to the ground. This summer Google decided that we had a bookstore and gave our home address and phone number. I have been battling to get it off Google since we started getting strange phone calls and I discovered it on their search engine. We would get calls almost every day wanting to set us up with something, usually to take credit cards, and from customers wanting a certain book. This would have been really nice when we actually had some books to sell, but under the circumstances it was just annoying. Every time I’d get set up to do some writing the phone would ring and I’d have to jump up. It became so bad that I ended up buying two more phones so I could put them near where I was working. I had to send off for a pin number, and of course that didn’t work. It would say it’d let me edit, but then it would just post that information, too. Finally after being annoyed all summer, I was able to get a second pen number and take it off the search engine. I'm not sure why it didn't work the first time. That's one thing about computers, you can do exactly the same thing and it won't work 5 times and then it'll suddenly work the 6th time you try something.
Posted by Livia J Washburn at 8:00 AM No comments: 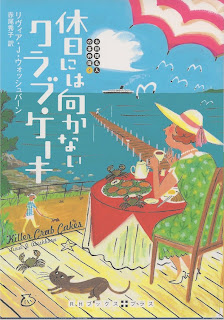 Killer Crab Cakes is now available in Japanese. I love the covers they put on this series. This book was set in Rockport, Texas where I spent many fun vacations as a child.

The book was published in trade paperback last year and will be reprinted in paperback soon.
Posted by Livia J Washburn at 3:19 PM 1 comment: