Character in 8th Fresh Baked Mystery up in Smoke 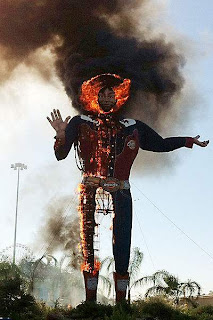 You never know what's going to happen when working on a novel.  Facts can change between the time you write the novel and the time it's published.  On the 8th Fresh Baked novel, facts changed just as I finished writing the novel.  The book is set at the State Fair of Texas.  Presently it's titled The Fatal Funnel Cake, which could change.  I had just finished a nice scene under the State Fair's legendary Big Tex when I saw on Facebook that he was on fire.  How was that possible?  He had been around since 1952. I turned on the news and not only had there been a fire, he was basically gone.  I was panicked.  The book was due to the editor in two days, and I had no idea how this was going to be resolved.  I sadly watched as they took Big Tex down the road in the back of a trailer, covered in a shroud.  I flipped from channel to channel getting different information from the news.  Online I searched hourly for new information.  Finally, I'd gathered all that I could and started rewriting, praying I could fake it close enough.  I knew I'd have one more chance to make changes when I receive copy-edited manuscript in the summer, but that there was a good chance I wouldn't know any more then.  I won't really know exactly how the new Big Tex will look until he's unveiled for the 2013 State Fair of Texas.  Still, how weird was it that he'd been around for 60 years and I finish the book he's in and then he's gone?  I wonder about these things . . . like why my fortune cookie was empty yesterday . . .
Posted by Livia J Washburn at 8:13 AM 3 comments:

Another Review of Wedding Cake Killer

I love the baking and the camaraderie of the friends who share Phyllis' house. The mysteries are always well written and well plotted. WEDDING CAKE KILLER is no exception.

To read the rest of the review go to Fresh Fiction.
Posted by Livia J Washburn at 7:06 AM No comments: