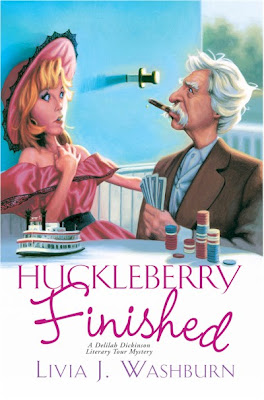 Publishers Weekly likes my second Delilah Dickinson Literary Tour mystery, HUCKLEBERRY FINISHED. You can read the review here. The book will be out at the end of October. I just turned in the third one in the series, KILLER ON A HOT TIN ROOF.
Posted by Livia J Washburn at 9:08 AM No comments: 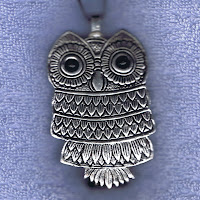 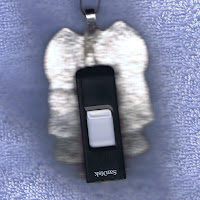 Last week my computer died and I lost some of my data because my usb memory stick was in my purse. I didn't take the time to go dig it out and backup. I won't leave it next to my computer because the one I did before burned with the house last year. I've decided never again. I bought a ugly memory stick with 8g of memory and glued and wired it to this owl pendant. Added a ribbon and I will now be wearing my computer backup. With a flick of a switch the usb connector comes out under the tail. I wonder why there isn't jewelry like this on the market. 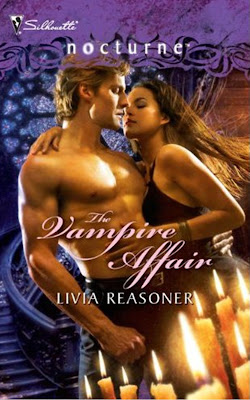 This is the cover for my Silhouette Nocturne novel that comes out around November 1. I’m very pleased with it. I like the colors, and the characters actually look like they’re described in the book. The manuscript went through several titles before the editor and I decided on this one, and while I’m aware that it’s the same title as an old Man From U.N.C.L.E. novel, it really seemed to fit the story. I’ve written paranormal romances before, but this is my first book with vampires in it. I had a great time writing it.
Posted by Livia J Washburn at 1:54 PM 2 comments:

Writers, Health, and a Writers Imagination 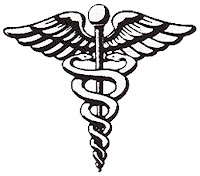 I believe writers are either the best at handling illness or the worst. Of course anytime any illness occurs in ourselves or families, we start researching. What could it be? What is the best treatment? Is this something that I can treat without a doctor? Sometimes this works out, and other times it just adds terror to our lives.

At one time I actually wondered if I had the Plague. Hey, quit laughing. Doctors were seeing cases showing back up at the time and the symptoms fit. I went to doctor after doctor trying to find out what was wrong, and they were baffled. I took many rounds of antibiotics the various doctors prescribed which caused even more problems, went to several specialists, and had an MRI of my brain. It was through my research that I discovered that many of my symptoms could be caused by nasty food allergies. I went in for a food allergy test, of course that doctor messed up and just did an environment allergy test which I didn’t want. I had already paid for the test, so I just lost that money. I went to a different doctor and had the test I wanted done. Sure enough I was allergic to legumes, and soy was making my life miserable since it is hidden in a lot of foods. Changes to my diet made a world of difference. This took care of at least half my symptoms. If I hadn’t researched, would the doctors have finally stumbled on this? I don’t know, but I would have suffered even longer waiting for the right doctor to discover it. The rest of my symptoms still baffle the doctor. All I know is it isn’t Lupus, even though it fits the symptoms . . .

This week my father started telling me that he could no longer take his blood sugar test on his right hand because it tested wrong. When questioned it turned out his blood from his right hand was testing higher. Now I will admit, I thought he was delusional. Blood flowing through the body should be the same, right? Well, doing what a writer does, I hit the search engines. What do you know, the dominant hand can have a different reading, but it’s the one he should be testing on. People have reported getting numbers 30-40 points higher in their dominant hands. Your dominant hand is more likely to reflect the more recent changes in your blood sugar because of increased blood flow. He’s not going to like it when I tell him the higher number is the one he should have recorded.
Posted by Livia J Washburn at 6:23 AM No comments: