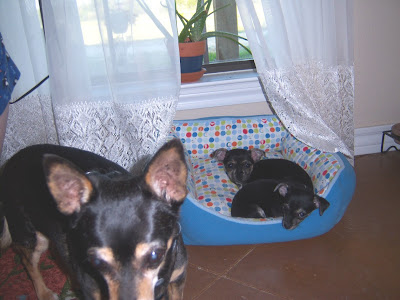 We finally settled on the names for the puppies. Who would have thought it would be that hard to name a couple little female pups. We went through a lot of names, but none fit them. I threatened to call them Jo and Anna since our youngest daughter, Joanna, recently moved out. I wasn't serious and she saw the humor in it.

I thought about Calamity and Belle, but we had a little goat named Belle. John suggested Min and Pin and Michael Davis went even further with Minnie and Pennie. Good names, but not for these two. Michael came up with a lot of good ideas for names on Facebook, some we’ve even used in the past for pets.

Finally we decided to name them Nicki and Nora. I like the salute to the mystery series, but since we didn’t have a boy pup Nick was changed to Nicki. Nicki also has a second meaning to us. When our daughters were little we read a book called No No Nicky. They loved that book. It was a book the whole family knew without actually seeing the pages, because we read so many times. Even though it was about a cat, it really fits the smallest pup. She climbs up my leg when I’m sitting and suddenly I have a tiny pup in my lap. She climbs so high, I’m afraid she’s going to fall. We do seem to say no, no to them a lot. They are only eight weeks old and have many things to learn not to do. Like don't go near the grumpy ol’ dog we’ve had for many years. I think he must look a little like Momma because they really, really want him.

They are getting more adventuresome which can be a problem because we have a pair of hawks that live in the nearby woods. Yesterday one flew right over them. Luckily it wasn’t interested in them because it had a big ol’ snake.

I’d forgotten how much fun babies were. We’ve had kittens before but never puppies this young. They will just make you laugh out loud and our house hasn’t had enough laughter lately.
Posted by Livia J Washburn at 7:19 PM No comments:

There is a very nice review of The Christmas Cookie Killer by Pamela James at the Mayhem and Magic blog. Thanks Pamela.

Posted by Livia J Washburn at 5:53 AM No comments: 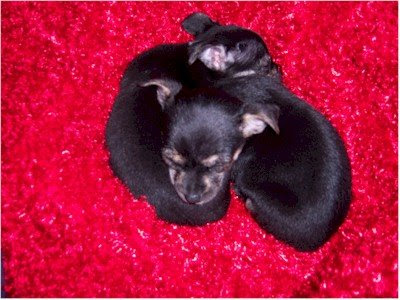 We have two new additions to the family. Today James and Shayna went to Denton and brought home these two little girls. These little half-pints are seven weeks old Min-Pin/Chihuahua mixes. They napped in a plastic tub while I 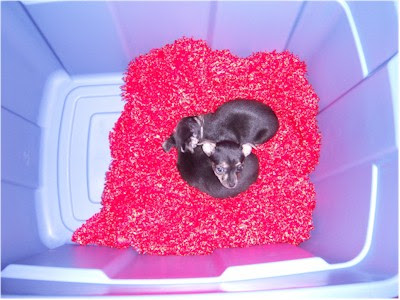 Now we need to come up with names. Any suggestions? 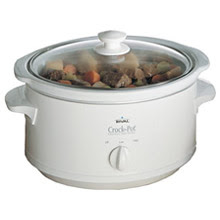 I finally bought a new crock-pot to replace the one I lost in the fire over a year ago. I never really used the old one that much at home. Actually I had two of the big ones, but they were bought to make nachos for the school math and science team home competitions while our daughter was on the team. James and I ran the concession stand for the teams for several years. You wouldn’t believe how many pots of cheese we’d sell in one competition. I would have to get up especially early on those mornings to start a batch in the first pot. The kids would start buying nachos as soon as we’d set up for breakfast. While setting up, I’d start the next batch in the second crock-pot so hopefully it’d be hot by the time the first batch was gone, so I could start the next pot of cheese, and then the next . . . I really hated nachos by the time our daughter graduated high school.
This morning I filled my new crock-pot with baby carrots, onions, celery, red potatoes and two braised chuck roasts. The smell is already getting to me and I haven’t even had breakfast yet. If it turns out tasting the way it smells, I’ll split it between us and my parents. I do love cooking a whole meal in one pot, not to mention I can work through the time I would normally cook supper.
Posted by Livia J Washburn at 7:15 AM 4 comments: