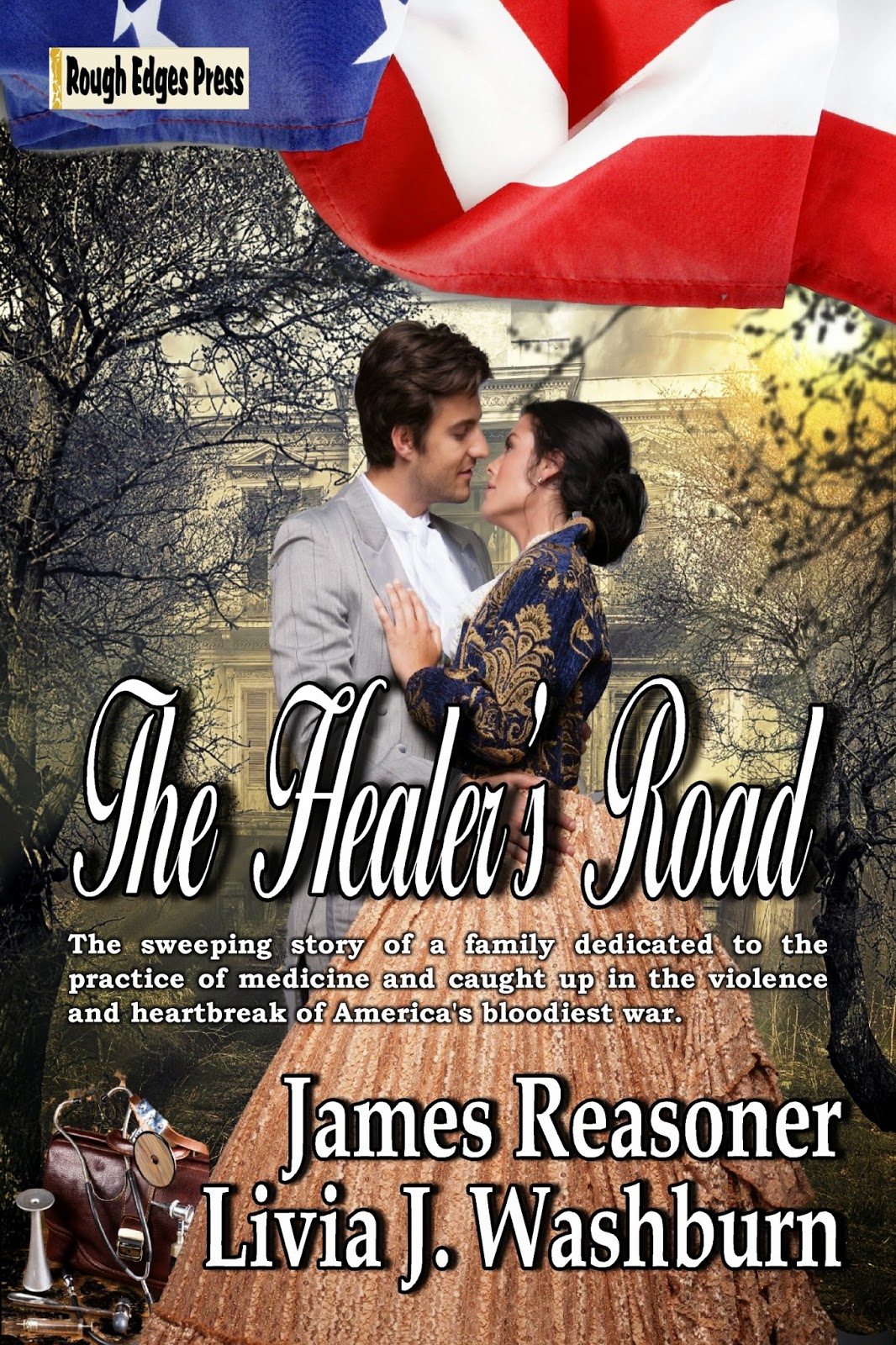 For more than thirty years, bestselling authors James Reasoner and Livia J. Washburn have chronicled the story of America in their award-winning historical novels. THE HEALER'S ROAD is one of their greatest sagas, the sweeping story of a family dedicated to the practice of medicine and caught up in the violence and heartbreak of America's bloodiest war.

Thomas Black rose from poverty, superstition, and tragedy to become a respected physician. His son John is reluctant to follow in those footsteps but is forced to do so by the madness of war. And Thomas's daughter Sara is the most devoted of all to healing the sick and injured, despite living in a world that opposes her every ambition.

From Boston to Washington D.C. to the battlefields of the Civil War, THE HEALER'S ROAD is a tale of triumph and loss, of courage and despair, of life and death and love and hate vividly portrayed by a pair of master storytellers. Long out of print, THE HEALER'S ROAD is now available again in this newly revised e-book edition.

On the left-hand wall were more tall wooden cases, these with solid doors. They contained medical instruments and surgical equipment: stethoscopes, thermometers, lancets, scalpels, boxes of sutures and ligatures, a carbolic acid atomizer, sponges, bandages, splints, syringes, tourniquets...the list was almost endless. Once a physician's equipment had consisted primarily of leeches; now in these advanced days of 1866 it seemed there was a tool or gadget for practically every purpose relating to medicine.

But the most important tools of all were the ones that had always been there, the man thought as he leaned back in his chair. The observant eyes, the keen brain, the caring heart...those were the things that really made someone a doctor.

After a moment the man leaned forward and dipped the pen in the inkwell again, then began to write.
Thomas Jefferson once said that the patient sometimes gets well in spite of the medicine. I might add, in spite of the physician, as well. However, there is no doubt in my mind that many individuals are drawing breath today who would not have been, save for the efforts of a doctor. Therefore, the practice of medicine is now, as it has always been, a noble and necessary one.

The man laid his pen aside and looked down at what he had written. After a moment he grunted and crumpled the paper, tossed it aside. The words sounded like an introductory lecture in the medical school he had attended many years before, not a heartfelt missive to someone he cared about very much. He took a clean sheet from a stack on the desk and began again, leaving off the formal address this time. He simply dated it February 12, 1866, wrote the salutation, and began:

Though I have not often said it, I love you very much and am quite proud of you. But never more proud of you than I am today. I applaud the course you have chosen and wish you all the best of fortune. You will doubtless need it, because the road you have chosen can be a difficult one. I know this because I have followed it myself. Once I was not a physician. In fact, I would have happily shot the first so-called doctor I ever met....

Lifelong Texans, James Reasoner and Livia J. Washburn have been husband and wife, and professional writers for more than thirty years. In that time, they have authored several hundred novels and short stories in numerous genres.

James is best known for his Westerns, historical novels, and war novels, he is also the author of two mystery novels that have achieved cult classic status, TEXAS WIND and DUST DEVILS. Writing under his own name and various pseudonyms, his novels have garnered praise from Publishers Weekly, Booklist, and the Los Angeles Times, as well as appearing on the New York Times and USA Today bestseller lists. He recently won the Peacemaker award for his novel Redemption, Kansas. His website is www.jamesreasoner.com.

Livia J. Washburn has been writing professionally for over 30 years. Washburn received the Private Eye Writers of America award and the American Mystery award for the first Lucas Hallam mystery, WILD NIGHT. Her story “Panhandle Freight” a Hallam story, in The Traditional West anthology, was nominated for a Peacemaker award and her story “Charlie’s Pie” in the Wishing For a Cowboy anthology, won the Peacemaker. Her website is www.liviajwashburn.com. They live in the small Texas town they grew up in.