Blog-a-Book-Scene is a monthly themed blogging endeavor from a group of authors who love to share excerpts from their stories. Find us on Twitter with the hashtag #blogabookscene and #PrairieRosePub.

January’s theme is Baby, It’s cold outside.  The cold Alaskan excerpt below is from my western romance novel, Lizzy that was included in the boxed set Mail Order Brides for Sale: The Remington Sisters! There are four Remington sisters, and a novel about each romantic adventure. This is my 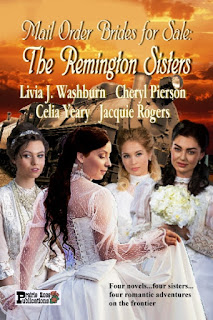 Brought up in the wealth and comfort of Eastern “old money” in staid and proper Philadelphia, the Remington sisters are forced to scatter to the four winds and become mail-order brides. In order to gain a fortune, their sinister step-father, Josiah Bloodworth, has made plans to marry them off in loveless marriages. Time is running out, and no matter what lies ahead in their uncertain futures, it has to be better than the evil they’re running from…

LIZZY: Livia J. Washburn
Elizabeth Remington’s world is turned upside down when she is forced to become a mail-order bride. With her cat, Fulton, Lizzy flees to Alaska—only to discover the man she’s to marry is not who she thought he was! Now, she must protect herself from the biggest danger of all—her own heart. Handsome Flint McKinnon has signed his soul away to her step-father, hasn’t he? He’s chased Lizzy across the continent, but can she believe him when he says he loves her?

From the way Lizzy was having trouble catching her breath, she would have thought she was much higher in the mountains, where the air was thinner.

But it was Flint’s simple declaration that had stolen all the breath from her body. He was looking directly into her eyes, and the sincerity, the utter truth she saw in his gaze, shook her to her core.

“Yes,” he said. “Why do you think I followed you all the way here to Alaska? I had a bit of money of my own saved—not enough to rescue my uncle’s business ventures—but enough for me to track you down after you disappeared. I hired detectives, and they led me to that matrimonial agency. From there, I learned that you were supposed to marry a man named Gabriel Devery in Seattle. That...that tore me up inside, Lizzy.” The pain in his voice and on his face was undoubtedly genuine. “You fled from marrying me, but you were willing to marry a stranger just to get away.”

“From Josiah,” she said. “To get away from Josiah and his scheme...but I can see...I can see why you felt the way you did.”

“I’m glad of that, anyway. Glad you understand.”

Without thinking about what she was doing, Lizzy reached out and rested her fingers on his forearm. “Why didn’t you tell me all this as soon as you arrived in Harrisburg?” she asked. “Why did you let me stay angry at you?”

“Pride, I guess,” he said with a sigh. “Although how a man who’s just chased a woman all the way across a continent can have any pride left, I don’t know.”

“There’s nothing wrong with a man going after what he wants. No reason not to be proud.” Lizzy swallowed hard. “If that’s what he really...wants.”

“More than anything in the world,” Flint said.

His hands came up, rested gently on her shoulders, urged her toward him. Lizzy didn’t resist. His fingers grazed the side of her neck, slid along her jaw to cup her head with incredible tenderness. It was amazing how those hands, strong enough to swing a pickax or fight for what was right, could be so soft and compelling now in their touch. Her head tipped back, not forced but willingly, instinctively, and her eyes closed as she felt his warm breath brush her cheek.

An instant later, his lips found hers.

Lizzy moaned softly, deep in her throat, as she put her arms around his waist and molded herself to him. The urge to be closer to him, as close as humanly possible, rose up and crashed through her in an irresistible wave. She clung to him as their mouths worked together, hungrily, passionately, and the sensation made her head spin until she felt like she was flying high in the air, higher than any of these majestic mountains that rose around them.

There was no way of knowing how high she might have flown, because at that moment the sound of a gunshot blasted through the gulch and set off clamoring echoes among the slopes. 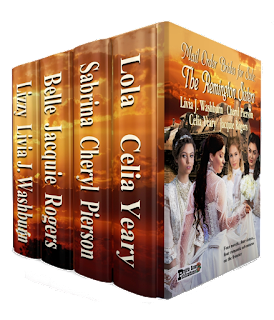 Lizzy is only one book in Mail Order Brides for Sale: The Remington Sisters! It’s on sale now and also contains novels by Cheryl Pierson, Jacquie Rogers, and Celia Yeary.

Coming FebruaryTheme All You Need is Love

Posted by Livia J Washburn at 3:00 AM