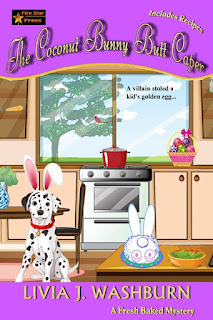 Zachary “Buck” Williams asks Phyllis to help him throw a big Easter shindig with games and food and an egg hunt, inviting everybody from the whole county to join in the fun.

It’s a beautiful spring day in Weatherford, Texas, as kids are running and playing and parents are chatting and sampling wonderful home cooked foods. It was all fun and games until someone played hide and seek with the prize egg leaving Phyllis having to find the culprit.

The Coconut Bunny Butt Caper is a short story that follows DEATH BAKES A PECAN PIE the fourteenth novel in the critically acclaimed and best-selling Fresh Baked Mystery series. Phyllis and her friends tackle another complex case with all the humor, camaraderie, good-hearted warmth, and delicious recipes that have made readers around the world fall in love with this series.

On a beautiful spring day under an almost cloudless blue sky, Phyllis Newsom smiled as she watched the crowd of children running and screaming across the vast green lawn. They descended on the shrubbery and flowerbeds like a swarm of locusts.


“Dang,” Sam Fletcher said as he stood beside Phyllis. “Don’t get between a kid and an Easter egg, that’s all I’ve got to say.”
“They’re certainly enthusiastic,” Phyllis agreed. “This reminds me of the big Easter egg hunts that went on when we were young, and even when Mike was a child. I remember taking him to several of them, sometimes put on by family, sometimes by the community or one of the local service clubs. People don’t do things like that anymore. Not much, anyway.” She shook her head. “Just another way that things have changed, I suppose.”
“They’ve got a way of doin’ that,” Sam said. “But bringin’ back the old days was sort of the whole idea of this fandango, wasn’t it?