Sample Sunday ♫ WITCH GOT YOUR TONGUE by Livia J. Washburn


I took a deep breath, trying to calm my nerves. Then I had to tug up the neckline of the costume to make sure my boobs didn't pop out, being careful I didn't pull so much my panties showed. I’d been doing that all day. Even though it was Halloween, I couldn't believe that on my very first day on this job I’d been sent out dressed like a sexy witch in this skimpy costume.

It was gold with a black spider web design and had a tight orange corset with little black paw prints, cut low in front, and the fluttery skirt was so short the hemline was practically up to my butt. I wore fishnet stockings and high heels with it (although I had a pair of comfortable shoes in my car for driving between jobs). A tall, pointed, cliché witch hat that matched the corset sat on my head. I guess I looked okay. My boss at the agency seemed to think so. I’ve never been one for wearing racy outfits.
I reached out and pressed the doorbell of the suburban house. It was late afternoon, almost evening. Kids would start trick-or-treating soon. Meanwhile, I had a treat – or was it a trick? – of my own to deliver to the guy who lived here.
The door swung open, and the man who answered my ring stood there with his eyes widening at the sight of the sexy witch on his doorstep. He was in his mid-thirties and looked like a high school athlete gone slightly to seed. He had come in from work and shed his coat, but he still wore his tie. It was loosened and his collar was unbuttoned, but he hadn’t gotten rid of it entirely yet. He had a drink in his left hand.
“Are you R-Ronnie Holt?” I asked.
“Yeahhhh,” he said, sounding like he didn’t know what to make of me.
I put what I hoped was a seductive smile on my face and said, “I’ve g-got something for you.”
Stop right there. I know what you’re thinking. I wasn’t a hooker, no matter how I was dressed. I wasn’t a process server, either, which is probably what the less dirty-minded of you were thinking.
No, as Ronnie Holt’s surprised stare started to turn into a hopeful leer, I began to sing. I was scared to death, but I forced the words out anyway.
“The only sight I ever wouldst see 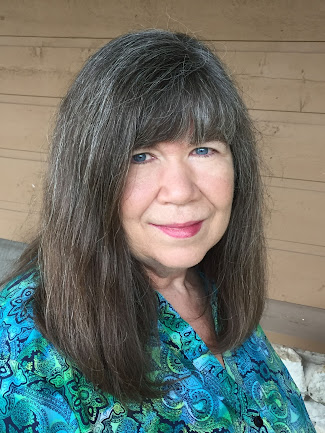 Under the names Livia J. Washburn and L.J. Washburn, Livia Washburn Reasoner has been writing award-winning, critically acclaimed mystery, western, romance, and historical novels for more than thirty years. She began to write in collaboration with her husband, and soon branched out into telling her own stories.

Livia lives in the Texas countryside with her husband, New York Times Bestselling author, James Reasoner, and her crazy rescue dogs. Her website can be found at www.liviajwashburn.com, and her Amazon page is http://www.amazon.com/Livia-J.-Washburn